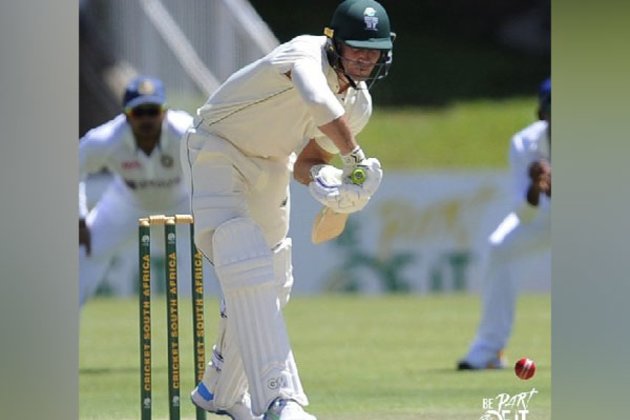 Bloemfontein [South Africa], December 7 (ANI): Half-centuries from Tony de Zorzi, Khaya Zondo and a hard-fought 75 off 180 balls (8 fours) from the opener, Sarel Erwee helped South Africa A to a competitive score at stumps on day one of the final four-day clash against India A at the Mangaung Oval in Bloemfontein on Monday.

After winning the toss and electing to bat first, South Africa lost inspirational captain, Pieter Malan (0) for no score before Zubayr Hamza (16) departed shortly after to leave the hosts on 44/2.

Having lost two partners at the crease, Erwee teamed up with Six Gun Grill Western Province batter, de Zorzi for a 111-run partnership for the third wicket to catapult SA A to 155/3 before substitute fielder, Upendra Yadav ran out the latter shortly after reaching his ninth First-Class fifty.

After raising his bat for half-century number 35 in the red-ball format, Erwee soon became the second of three victims to fall to India A's leading bowler, Navdeep Saini (3-42) before the fast bowler removed Senuran Muthusamy for a duck with the home side on 187/5.

Zondo and Sinethemba Qeshile (22) then brought up an important 51-run stand for the sixth wicket, with the Hollywoodbets Dolphins batter dispatching eight fours and one six on his way to a fifty before both batters fell late on, leaving Marco Jansen (4) and Migael Pretorius (1) at the crease overnight.