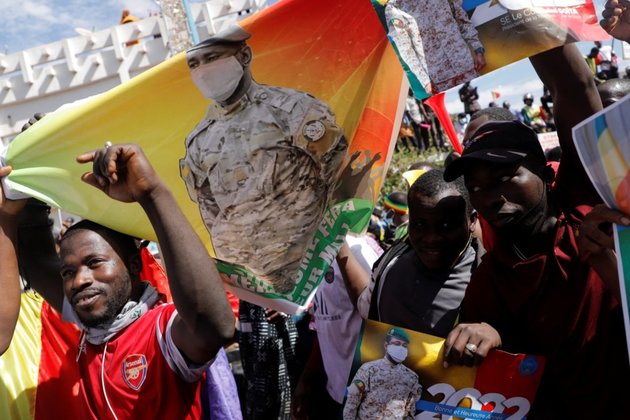 WASHINGTON - A key European diplomat believes there is still a chance to defuse the growing political crisis in Mali that has seen the country's interim military government clash repeatedly in recent days with both its neighbors and members of the international community.

Emanuela Del Re, the European Union's special representative for the Sahel, criticized Mali's current rulers for provoking countries in the region and Europe by postponing elections for five years and for bringing in Russian mercenaries to help with security.

But in an interview Friday with VOA, Del Re said she thinks the coup leaders will eventually have no choice but to relent.

"I think that despite, of course, the fact that the government is so firm in saying that they want this long transition because probably they want to stay in power for a long time, the pressure will be so strong that at one point they will have to come to a compromise," she said.

Del Re praised sanctions targeting Mali adopted earlier this week by the Economic Community of West African States (ECOWAS) and the EU, describing them as coherent and consequential, and called on the international community to maintain the pressure on the interim government.

At the same time, though, she and other European officials are continuing to talk to Malian officials and expect Mali to take part in a meeting scheduled for later this month in Brussels.

"The European Union wants to be coherent with this approach of the sanctions ... it wants to be firm in this sense," Del Re told VOA. "At the same time, it wants to also keep the doors open for negotiation."

"I am sure that there will negotiations. There will be a dialogue," she added.

Thousands of supporters of Mali's military government took to the streets Friday in the capital, Bamako, railing against the ECOWAS sanctions as unjust.

"But what they must not forget is that Mali is a lock, Mali is a dam. If Mali blows, and God help us, it will not blow, but if that happens, no one will have peace in ECOWAS,' he added.

Many of the protesters praised the military government for standing up to France, while others waived Malian flags and some even waived Russian flags.

A man holds up a sign reading 'Down with Emmanuel Macron, long live Russia' during a mass demonstration in Bamako, Jan. 14, 2022, to protest against sanctions imposed on Mali and the junta by the Economic Community of West African States (ECOWAS).

The presence of Russian flags is likely to increase concern in the West, with European countries and the United States repeatedly warning the military government against bringing in mercenaries from the Wagner Group, a paramilitary company with ties to the Kremlin.

"We have seen what they have done in the Central African Republic, the predatory behavior and the violations of human rights, so we have made clear that we are completely against their intervention in Mali," a European official told reporters Friday, requesting anonymity to discuss the sensitive subject when asked about reports that several hundred mercenaries are now in Mali.

According to the Africa Center for Strategic Studies, Mali's military government has committed to paying Wagner $11 million per month - $132 million a year - for the services of 1,000 mercenaries, an amount equal to more than 20% of Mali's yearly defense expenditures.

Mali's government has denied reports it is using Russian mercenaries, but the move appears to be having an impact on other international forces sent to the country to help fight against terrorists linked to Islamic State and al-Qaida.

Sweden's foreign minister said Friday that her country will withdraw from the Takuba Task Force, a European special forces mission to Mali, and that it may withdraw a couple hundred troops serving in Mali under the United Nations.

"We now know that there is Wagner Group," Sweden's Ann Linde told reporters in Brest, France, following a meeting of EU foreign ministers. "If they have a stronger and stronger impact, then it will be not possible to continue with those large number of troops from us."

Other European officials cautioned that additional troops could be pulled if the situation worsens and warned there could be regional implications.

"It cannot be accepted for its part for the risk of having a domino effect," Del Re told VOA. "The countries of the region, the countries of the G-5, for instance, they fear that this could be an example that might somehow give the idea of copying the situation to other countries."

Despite these complications, Del Re and other European officials insist they have no intention of abandoning Mali or its neighbors in the Sahel.

"What we are worried about very much is the population of Mali, because they are already in such a condition," Del Re told VOA. They don't deserve this situation."

Annie Risemberg contributed to this report from Bamako.