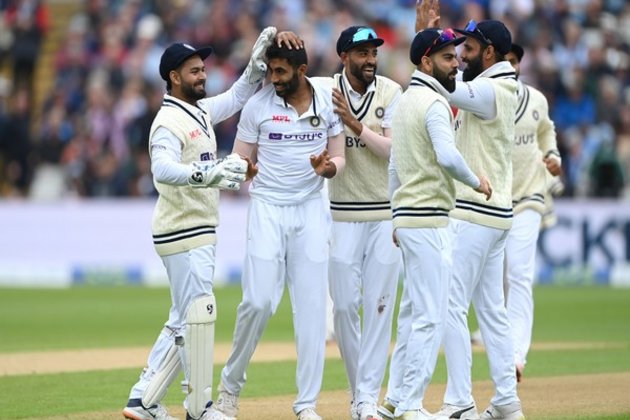 Birmingham [UK], July 2 (ANI): India have an edge on the rain-truncated Day 2 of the fifth and final Test between India and England at Edgbaston in Birmingham with captain Jasprit Bumrah leading the attack to bring five wickets down of hosts after a power-packed batting performance.

England were left struggling at 84/5 at the end of the final session.

At the end of the day, England's score in their first innings read 84/5 , with Jonny Bairstow (12) and Ben Stokes (0) standing at the crease. India were bowled out for 416 earlier in the day.

England resumed things at 60/3 after Tea, with Joe Root (19) and Jonny Bairstow (6) unbeaten on the crease. Root started off things nicely, hitting pacer Mohammed Shami for two fours in the first over after Tea.

Root-Bairstow added a total of 34 runs before pacer Mohammed Siraj dismissed Root for 31 after wicketkeeper Rishabh Pant caught the ball which hit the edge of Root's willow.

This brought spinner Jack Leach to the crease, who had come up on the order as a night watchman. He could face only five balls before he was sent back to the pavilion by Shami for a duck. The hosts found themselves in trouble, with half the team back in the hut at a score of 83 runs.

Skipper Ben Stokes was out next on the crease, with a duty to carry England throughout the remainder of the day safely. He did so, carrying the bat along with his partner at the end of the final session.

England batters continued their struggle against Jasprit Bumrah's lethal pace, finishing at 60/3 at the end of the second session.

England resumed their innings at 16/1 after lunch, with Zak Crawley (7) and Ollie Pope at the crease.

Pacer Jasprit Bumrah continued his dominating show in the match, dismissing Zak Crawley for 9 after he was caught by Shubman Gill at the third slip.

This brought Joe Root to the crease. He and Pope tried to stabilise the innings, but their stand was cut short at 17 runs after Pope was dismissed by Bumrah for just 10. Bumrah continued his heroics by taking the third wicket of the innings after Shreyas Iyer caught the batter at second slip.

The man-in-form Jonny Bairstow was up next. He and Root added together 16 runs before rain interrupted the play. Early tea was taken.

Earlier, a superb century by Ravindra Jadeja and late blitz by stand-in captain Jasprit Bumrah took India to a total of 416 on Day 2 in the first innings of the fifth and final Test against England here at Birmingham on Saturday.

India started off things on day 2 at 338/7. They were bundled out for 416 in 84.5 overs. Rishabh Pant (146) and Ravindra Jadeja (104) were the stars of India with the bat.Captain Jasprit Bumrah also contributed 31 in just 16 balls consisting of four boundaries and two sixes.

With this, he has surpassed legendary West Indies batter Brian Lara, who hit South Africa's Robin Peterson for 28 in an over in 2003. Following Lara are former Australian batter George Bailey, who hit England pacer James Anderson for 28 in 2013 and South African spinner Keshav Maharaj, who torched England's JoeRoot for 28 runs in 2020.

James Anderson was the star for England, taking 5/60 in 21.5 overs. Pacer Matty Potts also took 2/105 in 20 overs. Ben Stokes, Joe Root and Stuart Broad got a wicket each.

In the second innings, Jasprit Bumrah provided an early breakthrough, dismissing opener Alex Lees for just 6 runs by dislodging his stumps. Early lunch was taken due to rain interrupting the play.

Earlier, a brilliant century from wicketkeeper-batter Rishabh Pant and his 222-run stand with Ravindra Jadeja powered India to 338/7 on the first day of the fifth and final Test against England at Edgbaston Stadium here on Friday.

It was a loss that made the biggest news at the National Bank Open in Toronto on Wednesday as Serena ...